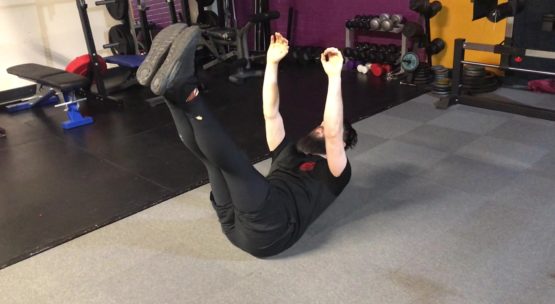 Plank – And its many variations

Ahh the plank, a common core exercise that everyone will do in a routine. Usually at the end of a workout and either do it for 1 minute or try go for as long as possible. This will work the core as if the core wasn’t being worked you wouldn’t hold yourself up.

However, most will not engage the core to make the plank work for you. You don’t need more than a minute at a time. Anything longer it starts becoming a parlour trick or a test of will and determination - not a bad thing, but if the plan is to improve the core muscles it’s pointless.

Instead when going into plank tense your abdomen as hard as you can (refrain from holding you breath/diaphragm) and try go for 40 seconds. If this is possible then try de-stabilising your core with added movements such as spider man planks or push pull planks. And instead of a couple of minutes in a routine do an entire session dedicated to this exercise – perhaps use some of the exercise from the list in-between a few planks?

When thinking of exercises and 6-packs the sit-up or crunch is the staple – more so than planks. Think of all those 80’s VHS tapes out there that showcase leotard clad, ‘White Snake Hair-do’, aerobic instructors that will get you on your back and start crunching away until your spine melts.

In similar vein to the plank (and all core work) it is how you set yourself up for these exercises and understanding how the body moves with abdominal crunches. Laying back with knees bent, try point your hands upwards and imagine you are sliding your fingers up against a wall rather than trying to fully sit up. Keep your chin away from your chest and focus all intentions into your rectus-abdominus (that ‘6-pack’ area). From here you can add different movements like twist to work obliques or add weight to your hands to increase the overload on the abs.

Scapulae Retraction – With a core focus

This is a great exercise to work the core from a functional/exercise specific standpoint. It builds the strength into the core to help develop on things like pull-ups/chin-ups. Initially a back exercise, but when you put efforts into the core it really demonstrates how important this area is when doing any other exercise.

Going into a dead hang on pull-up bar (hand can be pronated, semi-supinated or supinated) squeeze the shoulder blades together and then tense the abdomen and tilt your hips upwards. Release your core slowly, and only a little and then squeeze again repeating with little pulses.

No need to get the Dyson out for this one. A ridiculously simple exercise, but hard to grasp if your body awareness needs work. This exercise will also reduce your waist size and all you need to do is breathe in. It won’t strip the fat from your stomach but it does keep the core pulled in as it help with activating the long forgotten muscles that many will neglect – not on purpose but through not understanding how the core functions.

Leaning forward resting your hands on a surface hip high, slow your breathing down before you take a large controlled breath in. once fully in exhale fully then draw you belly in as tight as you can go. The trick is to feel the TVA (transverse abdominis – the corset like muscle the wraps around your lower ribs and connects to your pelvis) so all the work. You’ll know your doing it right because it’ll begin to cramp immediately, and you won’t be able to hold it properly for longer than 10 seconds.

This is a good exercise to just get a good focus on the core muscles doing the work. As stated, a few times already doing core work isn’t just about smashing out 100 sit-ups or leg lifts it is working the trunk of the body effectively.

Like a few of these exercises in this list the deadlift isn’t primarily a core workout. But what it does demonstrate is how well you core works under extreme pressures. Most shy away from this exercise because of stories of bad backs and blown discs. This is true, it is a movement that could harm you, like any other exercise when done with terrible from.

In our experience with clients performing the lift it isn’t lack of leg power or even the upper back and arms being able to maintain form on the lift but the lack of focus (there is that word again) on the core muscles. If you want to see if you are really getting a hang of your core work then test it out with a deadlift, if you walk away from one without your back coming apart then well done – you have a strong core.

A strong core means washboard abs and a 12-pack that is so tanned that even ‘Geordie Shore’ declined your application. Most may think this is usually a good way to know if someone’s abdomen is strong if you can see their abs. that depends if they have been following the points in this blog to work the core effectively.

But the core isn’t just abs. It’s the entire core of you body. Sometimes this can class as some mid back muscles to the glutes even. And one area that always doesn’t get a look in is the lower back. Back extension is a perfect way to work this. Under your own body weight, you simple on a bench with you upper body having forward and then, keeping the lower body secure through either a dedicated piece of equipment (such as a GHD) or a partner, lift your upper body upwards, squeezing the posterior chain of muscles.

Hollows – Planks for those that have injured shoulders

One downside to the plank exercise (through our experience) is that those that have shoulder injuries or even those that haven’t quite got the upper body strength will find it difficult to work their core effectively.

Hollows allow for the core to be put front and centre. Laying on your back first thing is to engage the core muscles and push you lower spine into the floor. Once done lift head and shoulders of the floor and legs too if you have the strength. If at any point your lower back starts to come away lower your legs or head and try again. Also run through point 6 to work on the strength in your lower back whilst you’re at it.

Spine mobility – The thing that holds it all

Not so much an exercise to work the core in a traditional sense but a vital ingredient, nonetheless. If your spine is too stiff or lacks mobility and so on how do expect to move the body to contract the muscles that are attached to it?

Working on things like glute bridges, lateral flexion and anything the gets your spine going through full range of motion allows for a greater focus (the amount of times I have used this word you could make a good drinking game out of it) on the core muscles.

In a similar fashion to the Deadlift, overhead exercises, such as the overhead press, aren’t core focused but if the core cannot be engaged and doesn’t have the strength to hold still whilst pushing overhead then you need to rethink your game a little.

Using the shoulder press as an example when going heavy, which is usually the way to go with this movement, first thing your core does if not strong enough is expand outwards and the thoracic part of the spine goes into extension putting unwanted weight into the lumbar section and giving you a bad time for your lower back. If this happens then you need to start doing more core work. If only there was a list that could help you pick the best ones…?

The ability to brace your core quickly and efficiently is paramount when doing contact sports. Of the nervous system is slow and your body awareness (around the core specifically) is bad, then when someone comes in for that body shot, you’re going to feel it.

Here is a test you can do. Tense your core muscles right now – you did one of a few things potentially. You may have taken a breath in and you’re now holding it to keep it tense. This is using your diaphragm to create pressure on your insides. You may have just draw in your rectus-abdominus muscles or you may have exhaled and tensed. The last one is correct when taking a punch as this prevents you being winded.

The core is a vital player in all exercises as it is the power house to keep things stable when lifting, allows for those heavier lifts to get even more heavy and also (with a good healthy diet) a strong core gives off that athletic look most think of when you hear 6-pack.

What are your ‘go to’ core workouts? Have you used any of these before? Have you read through this and thought to yourself that you having been going about this core workout the wrong way with high volume sets and 20-minute planks? Hopefully we have shed some light on the situation and have improved your way of life with this top ten.