In this blog, I will go through the best 10 exercises for shoulders in my opinion. If you want to get a shoulder workout and you don’t know what exercise to perform, here we have 10 of the best in my opinion. Either pick and choose or do them all one after the other, either way, all of them work and all target certain areas of the deltoids.

The standing barbell military press is considered one of the main 5… or 6 or 7 or however many exercises you like to class as the main ones. The military press is a compound movement that means it involves more than one joint and multiple muscles

Best set up on a squat rack, place a bar against shoulder level, grabbing the barbell just outside shoulder width. From this position engage your core and glutes, to keep yourself sturdy, take a deep breath in and push the barbell above your head. Bring the barbell back down (obviously, otherwise you’ll be stood there for a long time) but at a slower rate to really build the time under tension and get those GAINZ! 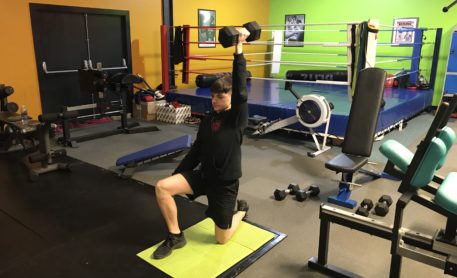 The kneeling single arm press can be performed with a dumbbell or, main thing is you get something that is comfortable to hold – not light, just ergonomic in the hands. A solid exercise to test core stability but also see which shoulder is not pulling their weight – although technically it would be pushing.

In order to perform this variation, kneel on one knee and with your other leg in front bent at 90 degrees. The weight will be in the same hand of the kneeling leg. It is very important before pressing to engage your core during the exercise, otherwise you’ll be putting unnecessary pressure on your lower back.

The landmine split-stance press has similar effects to the previously mentioned kneeling single arm press. However, the range of motion is pushed slightly ahead at an angle because of the landmine attachment. A great movement that can help with punching power as it mimics similar movement.

To perform this movement, you’ll need a barbell and landmine base, if your gym doesn’t have a one, place end of the barbell in a corner using a towel to protect the wall and jobs a good ‘un. Once the barbell is positioned, you need to assume a lunge or split stance then grab the bar with same hand of the rear leg. 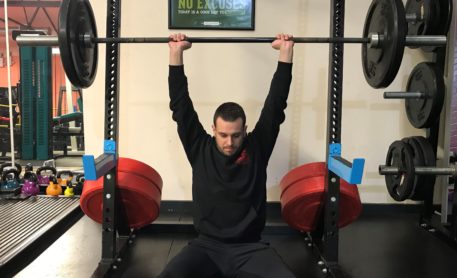 The z press is a variation of a military press, you can perform this movement with a barbell, dumbbell or kettlebell. The difference is you get to take a seat, almost like a rest, but once you perform this exercise you soon realise that it’s not a time to have a seat and relax.

Performing this variation, as stated, you need to sit, legs out ahead angled out at 45°, it requires trunk strength, hip flexor mobility, hamstring flexibility, and lumbar and thoracic spine support – a test of full body. From the seated position you press the weight above your head, is very important to keep your core tight during all the movement. 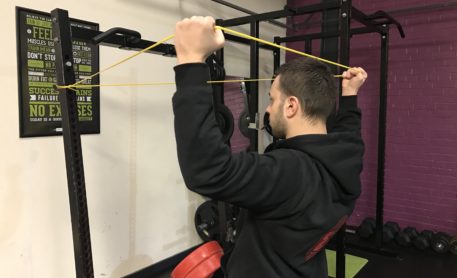 This complex is used to warm up the shoulders before a workout and build mobility, these are usually used as rehab exercises however, performed with a small weight, band or body weight. You are going through natural ranges of motion, improving mobility, activating, aiding in stabilisation and body awareness as well as strengthening.

Of all the exercises being done these exercises should be in every workout routine – especially shoulders. Essentially you move your arms like you’re doing Village People’s YMCA but your bent forward at around 45° and its YTWA… doesn’t have the same ring to it.

Carry and farmers walk will strengthening the shoulders like no other exercise as it works on an isometric hold. You can perform carry and farmers with any sort of weight, dumbbell, kettlebell, barbell, trap bar etc. moving the weight overhead increase the use of core muscle and more tension on the anterior deltoid.

Doing these exercises is simple as picking up a weight keeping a neutral posture and walking. For overheads the same thing but with it overhead. Just remember to engage the core more otherwise you’ll have a bad time with either weights landing on your head or you lower back cramping up – or both!

This exercise is great for targeting the posterior deltoids, a neglected part of the shoulder as it doesn’t have much play into daily life for an average person. However, it is one of the reasons people suffer with tight chest muscles and bad posture due to it being forgotten about when hitting those 1RM on the bench.

Bent over forward with the torso as close as parallel to the floor as you can get it. Using dumbbells and palms facing each other, raise your arms out until you’re in a T-position.

When picking an exercise to focus on building that wide upper body look the lateral raise is one of the best – isolating the medial deltoid it is great way of building the ‘boulder shoulder’ look.

Standing straight and bracing the torso – this means no swinging, lift the dumbbells to your side with a slight bend on the elbow and the hands tilted forward as if pouring water out of the dumbbells. Continue to go up until your arms are parallel to the floor, reverse the movement with more control. Make this harder by pausing at the top and/or not fully returning the weight down to your sides.

The face pull is a dynamic exercise that, in similar fashion to the Y, A, W and T raises, increases strength, mobility, stabilisation in the the rear regions of the shoulder (those small rear deltoids mentioned earlier) and improves posture.

For this exercise you can use a pulley machine or a resistance band – the effect is the same. Stepping back until arms are fully extended in front of you. Feet should be slightly wider than shoulder width apart and with a soft bend in your knees. Brace core and drive elbows backwards, while pulling the rope handles slightly outside of your ears – essentially pull it towards your face specifically the bridge of your nose. Hold and contract shoulder blades together.

The Arnold press is a variation of the traditional shoulder press and is named after Arnold Schwarzenegger, who used to movement to help build all three of the main muscles in the shoulders. If you’re going to follow someone’s advice on getting big strong shoulders, it’s going to be this guy. This exercise requires a rotational movement throughout the press portion of the lift, which increases shoulder stability and targets the inside shoulder muscles at the bottom of the lift.

Gripping the dumbbells as tightly as possible palms facing your face and arms bent, press them overhead, rotating the dumbbells until the palms are facing forward at the top of the press, pause, and then slowly lower the weight, reversing the rotating back to original position.